For more fantastic content like this, head over to superfly-autos.com!
There is always one car in every enthusiast’s life that is the dream car – the “must own” vehicle that one longs to have in their garage to obtain true automotive bliss. For Wisconsin native Randy Brickl, that car was the De Tomaso Pantera. Brickl fell in love with it the instant he rode in the passenger’s seat of his friend’s restored Pantera. The car had the panache of an Italian supercar and the raw power of an American muscle car, and was so cool that Elvis Presley even owned one – in yellow. 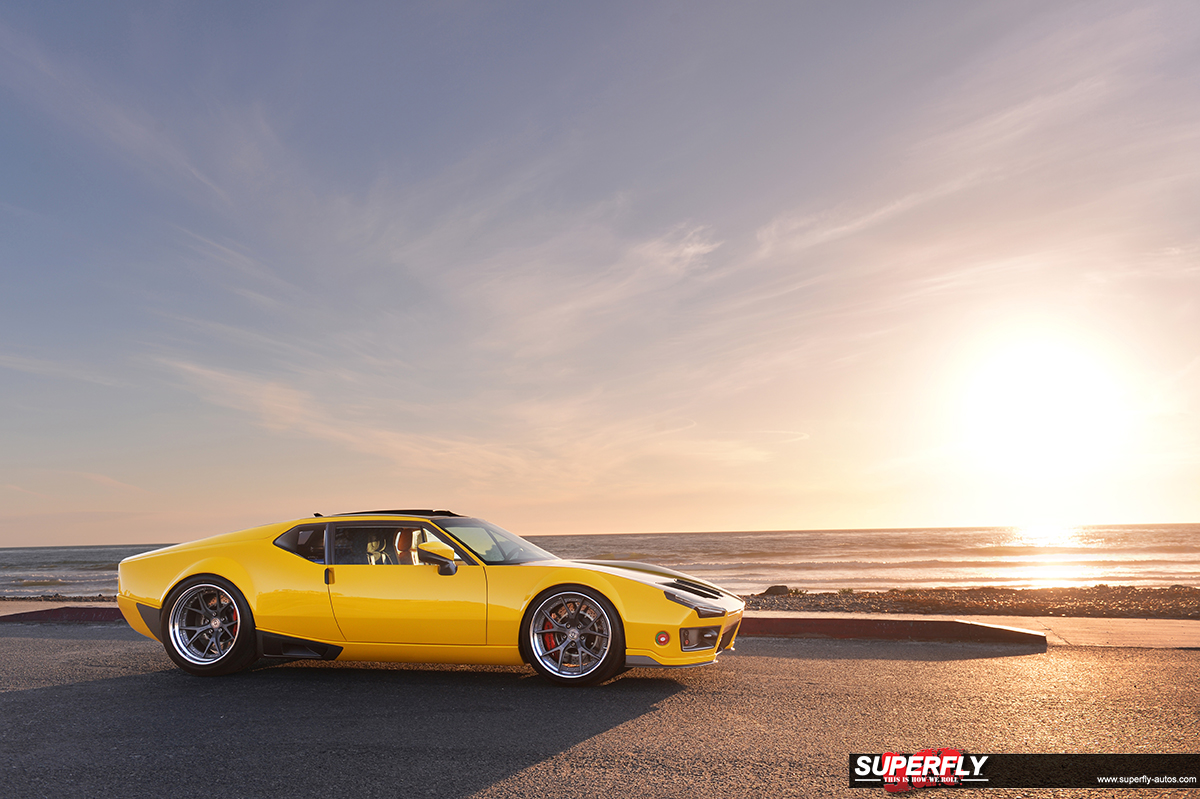 Randy was able to hunt down and buy a yellow Pantera, albeit one in rough shape, but planned to work on it himself and restore it to its former sports car glory. Unfortunately, not long after starting the project, Randy was diagnosed with cancer and was forced to shelve the restoration of his beloved Pantera until he recovered.  After months of fighting, Brickl lost his battle with cancer and his dream of having a restored Pantera was destined to remain unfulfilled. 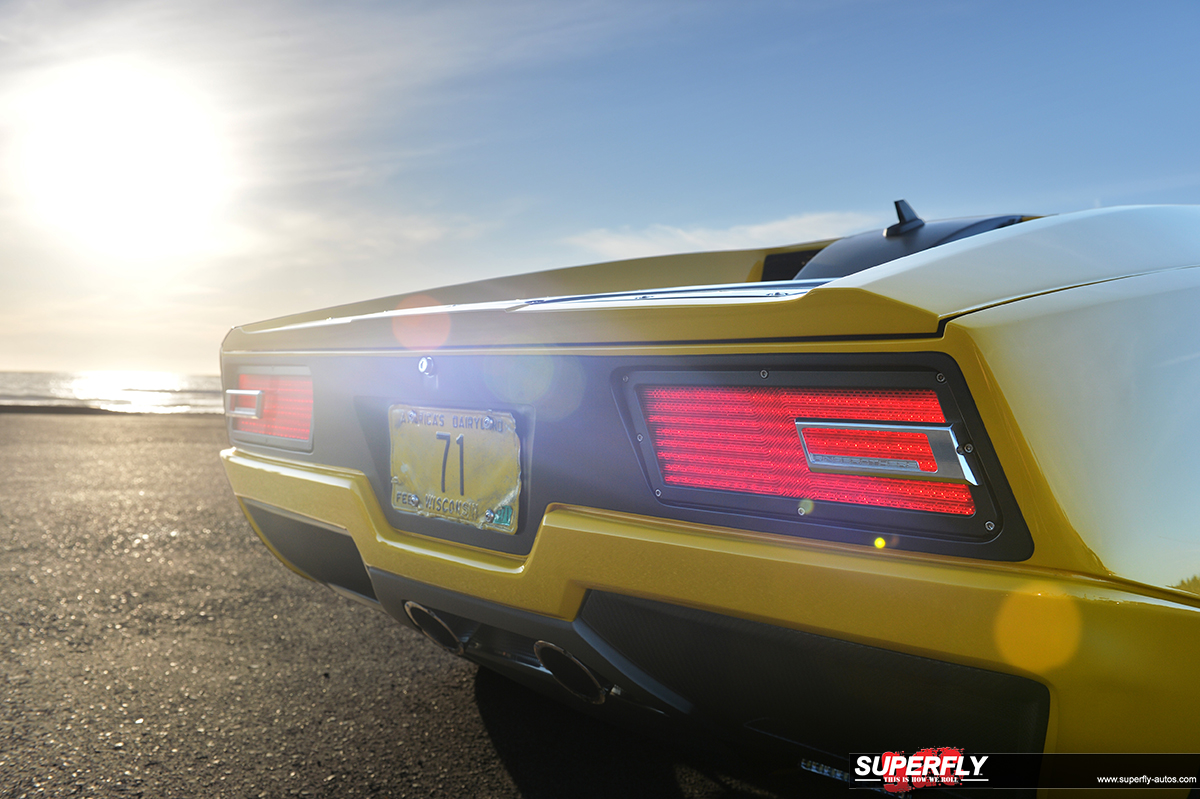 But this wasn’t the end for the car. Brickl’s widow, Cheryl, decided to finish the restoration of the Pantera to honor her husband’s last wish. She knew how much having that car finished meant to her late husband, but not being able to do the work herself, she took it to a local shop to be restored. However, a year down the road and the Pantera was still sitting untouched in the shop. That’s when a friend suggested she take the car to Ringbrothers in Spring Green, Wisconsin. 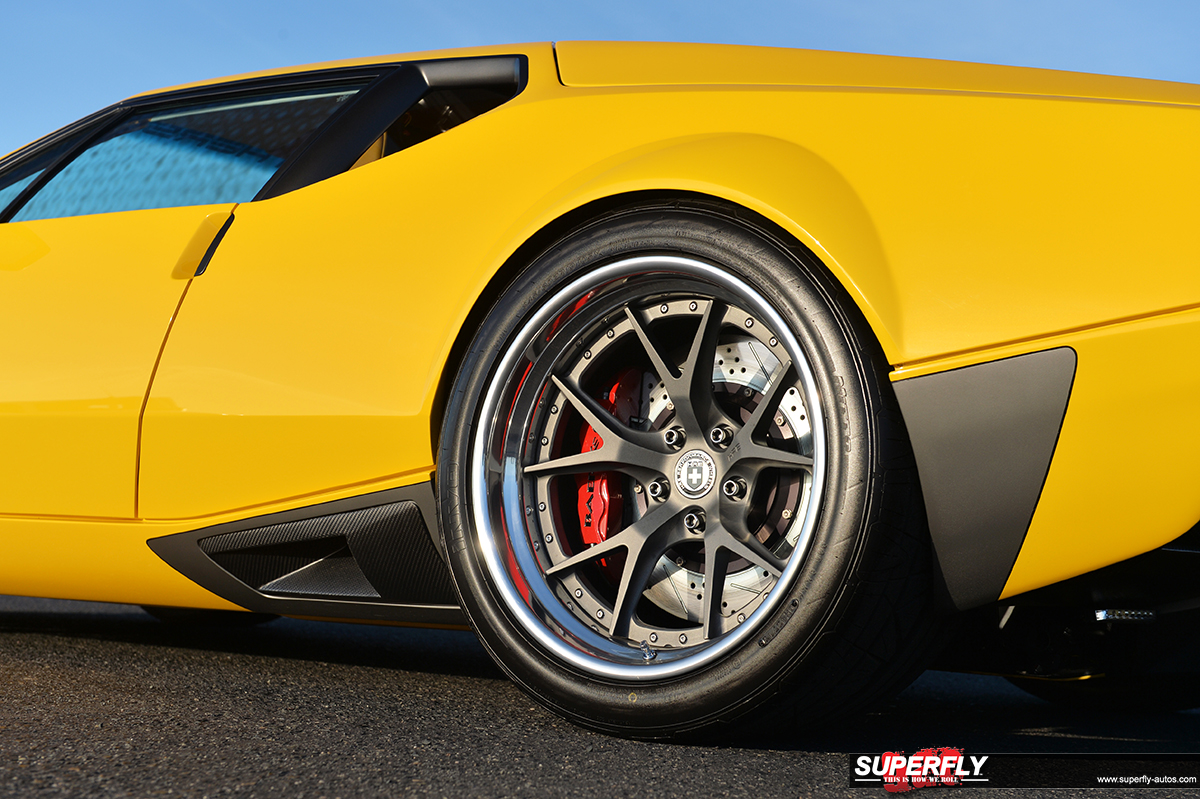 Ringbrothers, made up of founders and brothers Jim and Mike Ring, create custom cars that are truly one of a kind.  They gladly accepted the task of restoring the Pantera for Cheryl and when they asked her what she had in mind for the car, the only thing she requested was that it remain yellow. 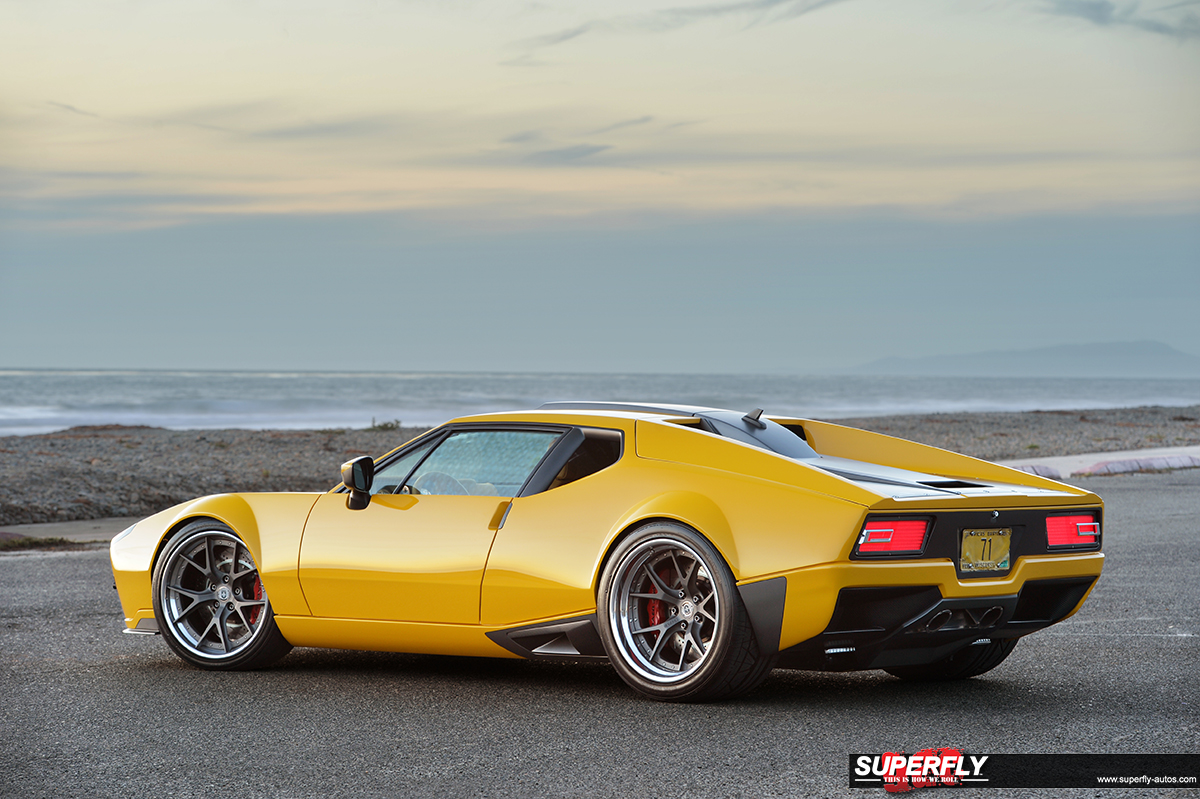 “When Cheryl first brought us the Pantera the plan was to do a full restoration on the car,” said Jim Ring. “But once we got it stripped down to the bare metal we realized how far gone the sheet metal really was. So we pitched Cheryl to let us do what we want to do and she went for it and let us.” Mike and Jim’s plan was now to reimagine the Pantera and build the car that they thought De Tomaso would build today.
So what changes were made to the Pantera? “There isn’t really anything left of the original car – it would be easier for me to tell you what we didn’t change,” Jim said. 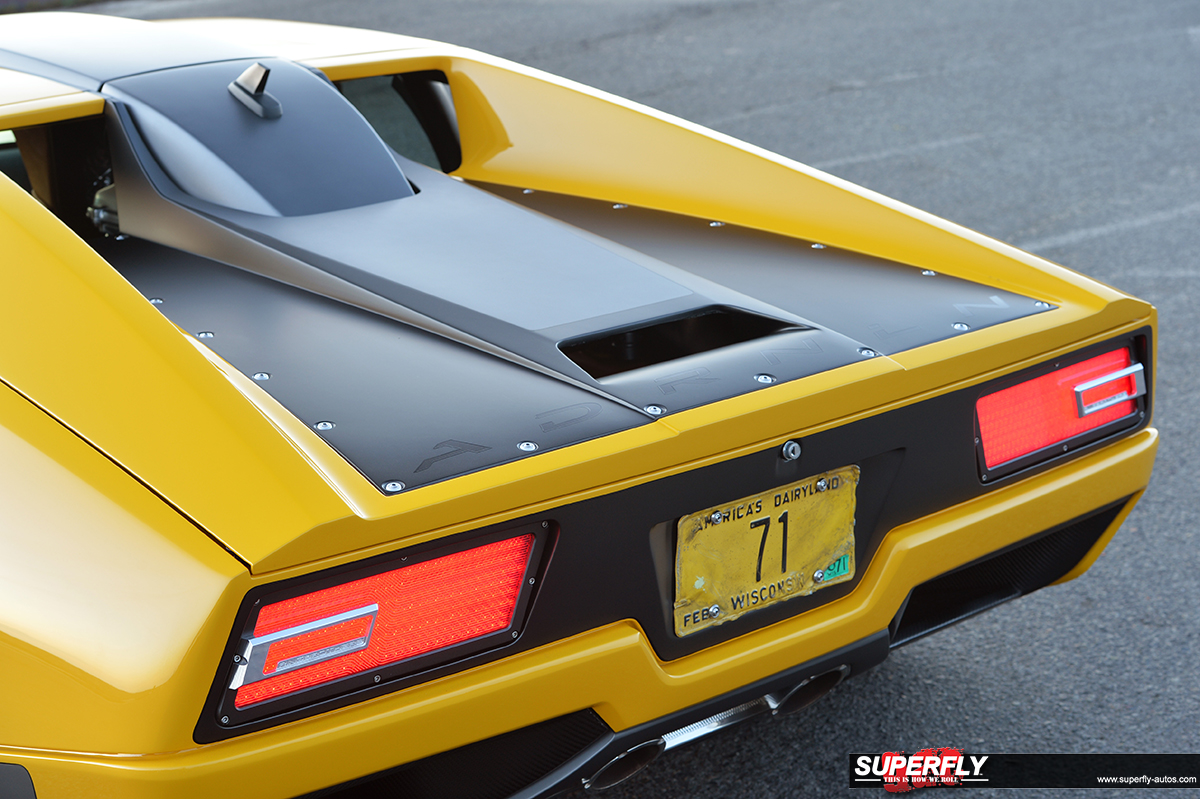 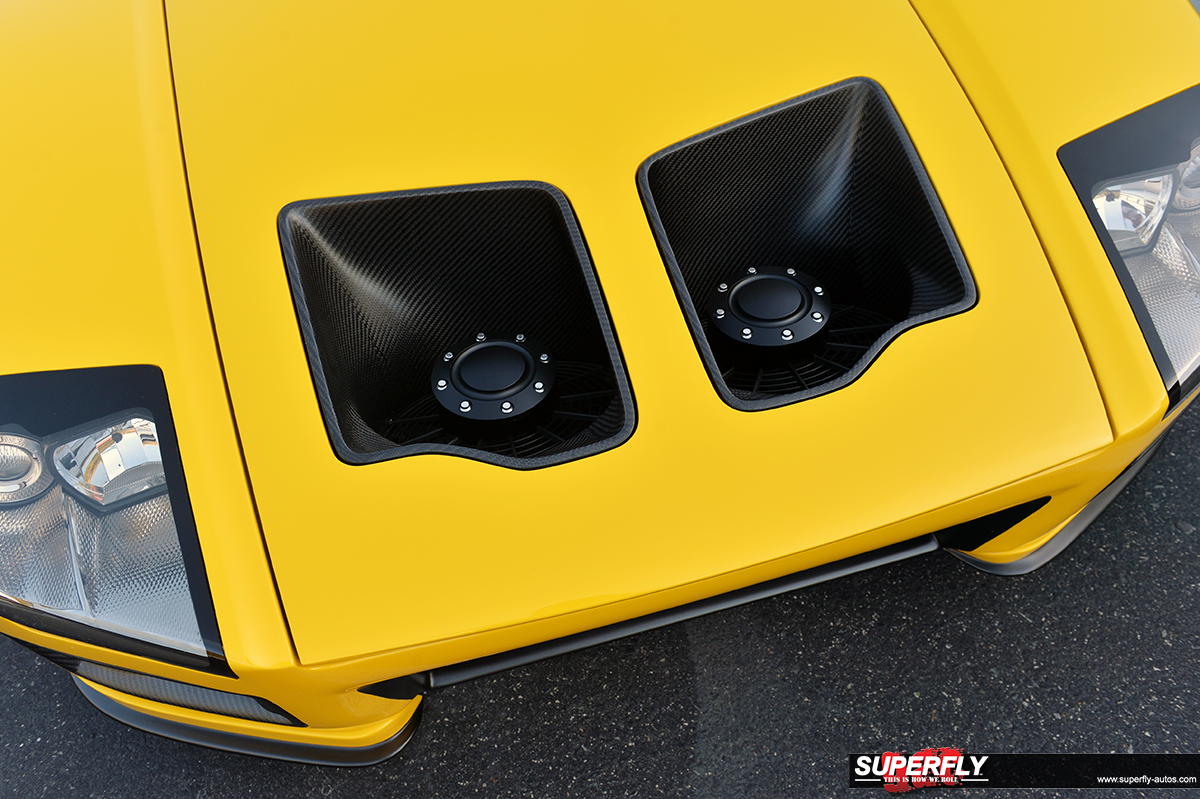 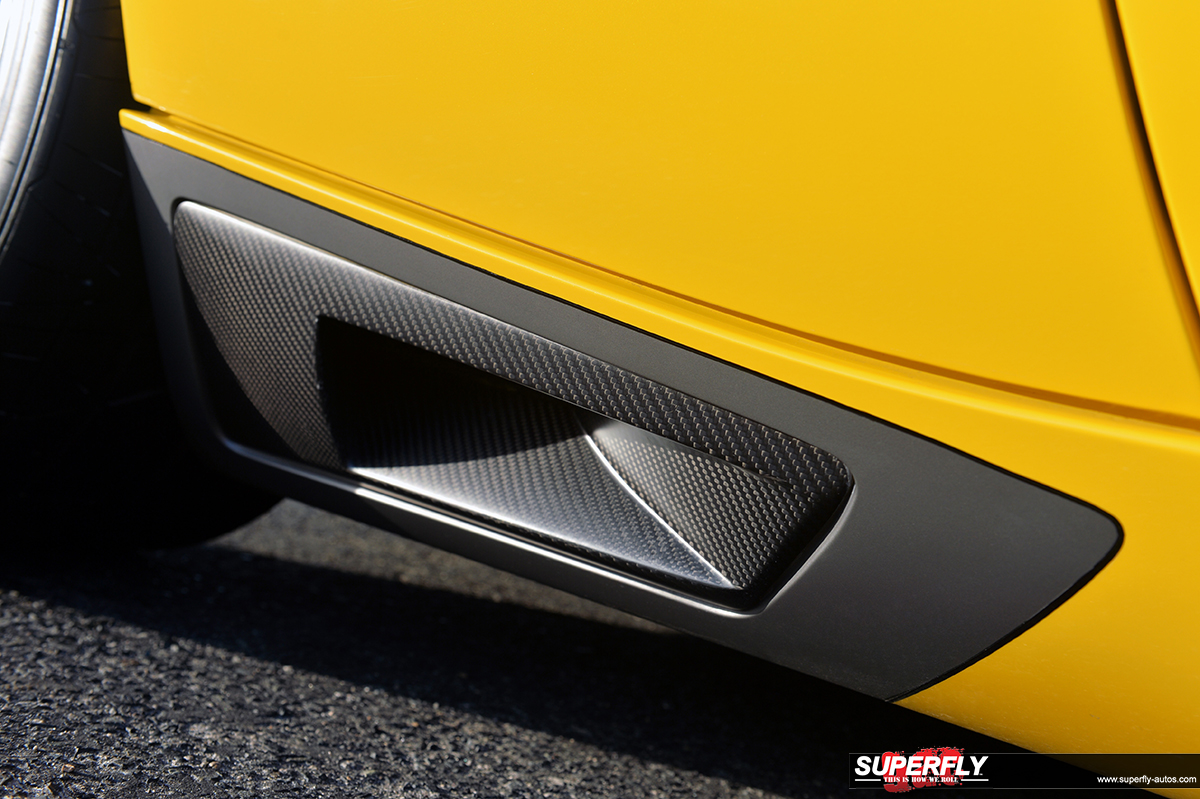 Every panel was built from scratch, with the exception of a few inches on the roof and the left side panel. The car now sits much lower, and the overall shape has been smoothed and updated, giving the car a modernized aggressive sports car stance. Most of the details of the car have been changed including sloping the lower rocker panels inward, making the fender peaks higher and widening the fender flares. The headlights have been integrated inside custom-made optically-clear composite enclosures from AM Hot Rod Glass, replacing the classic flip-up lights, and the actual light units came from a wrecked Audi A4 that belonged to Mike Ring’s daughter. The car was then finished in a custom BASF Glasurit Waterborne paint color called “Yellow Line.” This vibrant color makes the details of this vehicle pop and demands the attention of anyone in its vicinity. 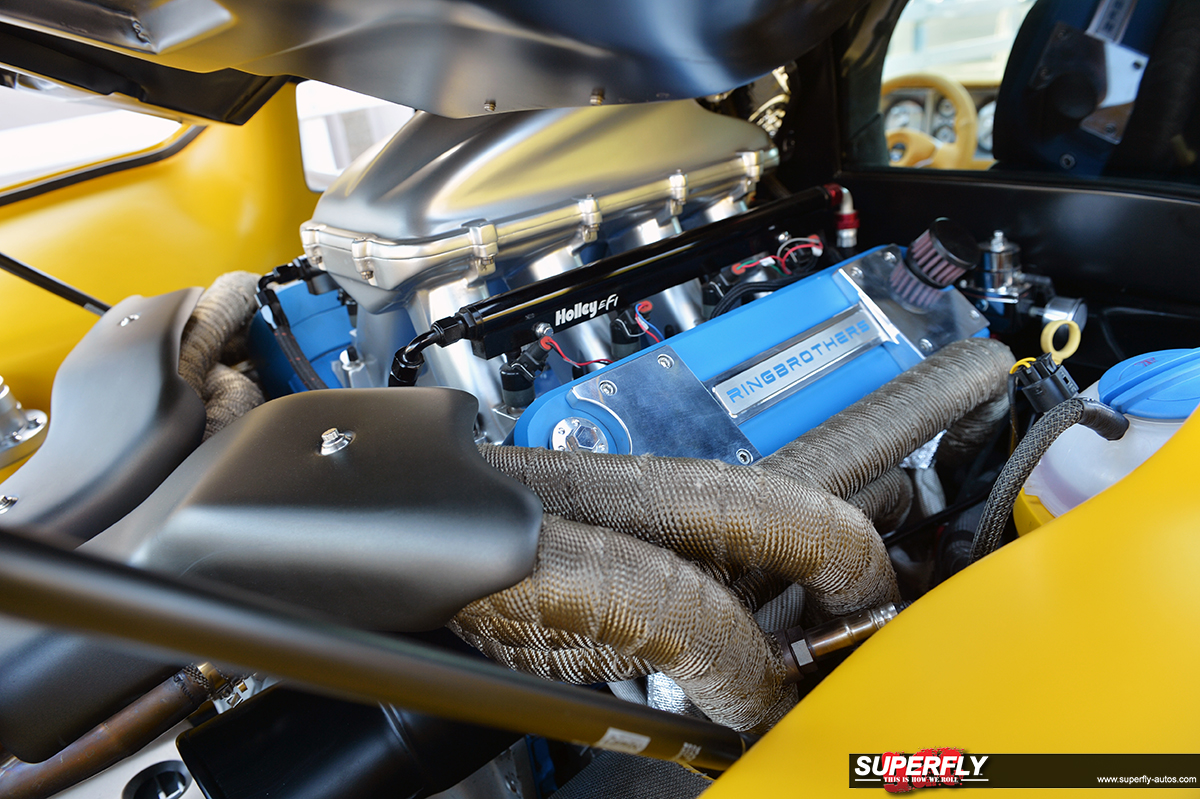 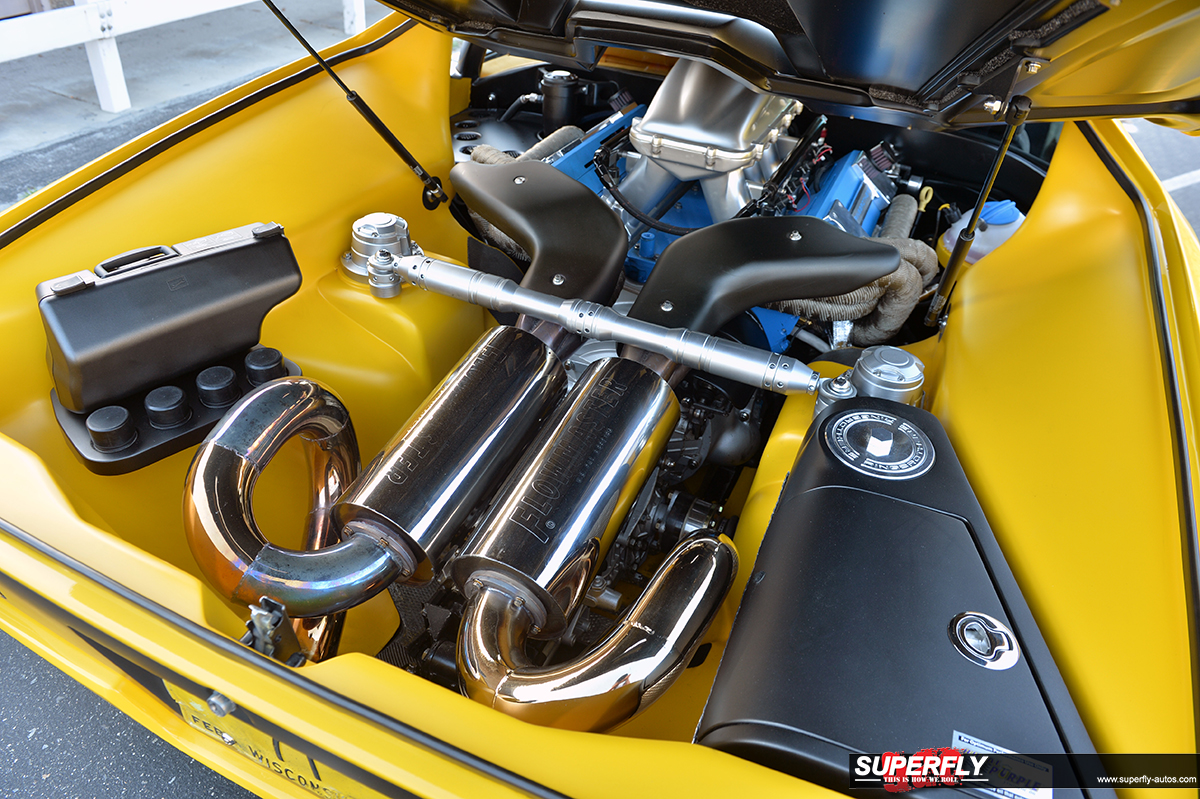 Inside the engine compartment, the original Ford 351 Cleveland engine has been replaced with a beastly Wegner Motorsports GM LS3 engine which has been massaged to produce a whopping 600 naturally aspirated horsepower with the help of a Holley Hi-Ram Intake Manifold and EFI system. Delivering all of those ponies to the ground is handled through a ZF five-speed gearbox from Bowler Performance Transmissions, with a B&M shifter handling gear changes. The five-speed transaxle is also set up dogleg-style, just like on the original Pantera.  To keep the engine and transaxle running smoothly, Ringbrothers filled both with Royal Purple synthetic lubricants. Though Jim Ring admits they get a bit of grief from Pantera purists for the LS motor, he insists that it is hard to beat the engine’s bang-for-the-buck, especially when you are working with a tight budget. 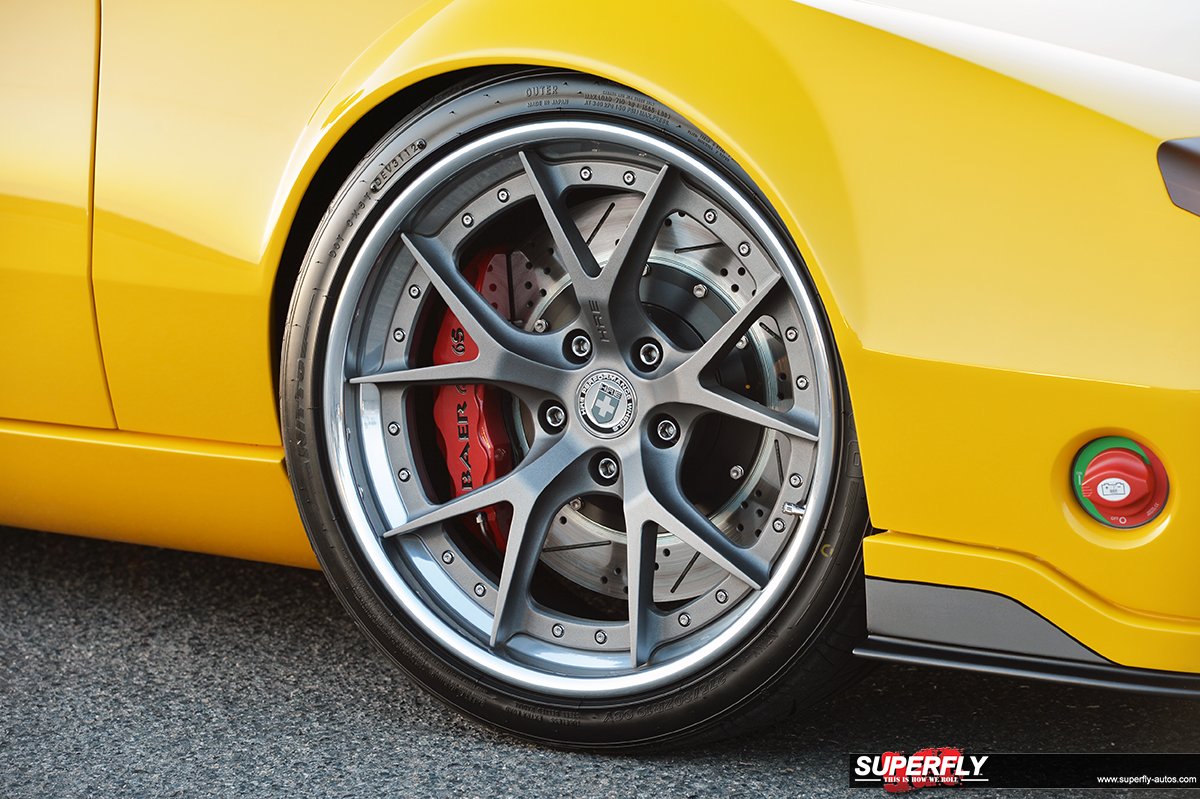 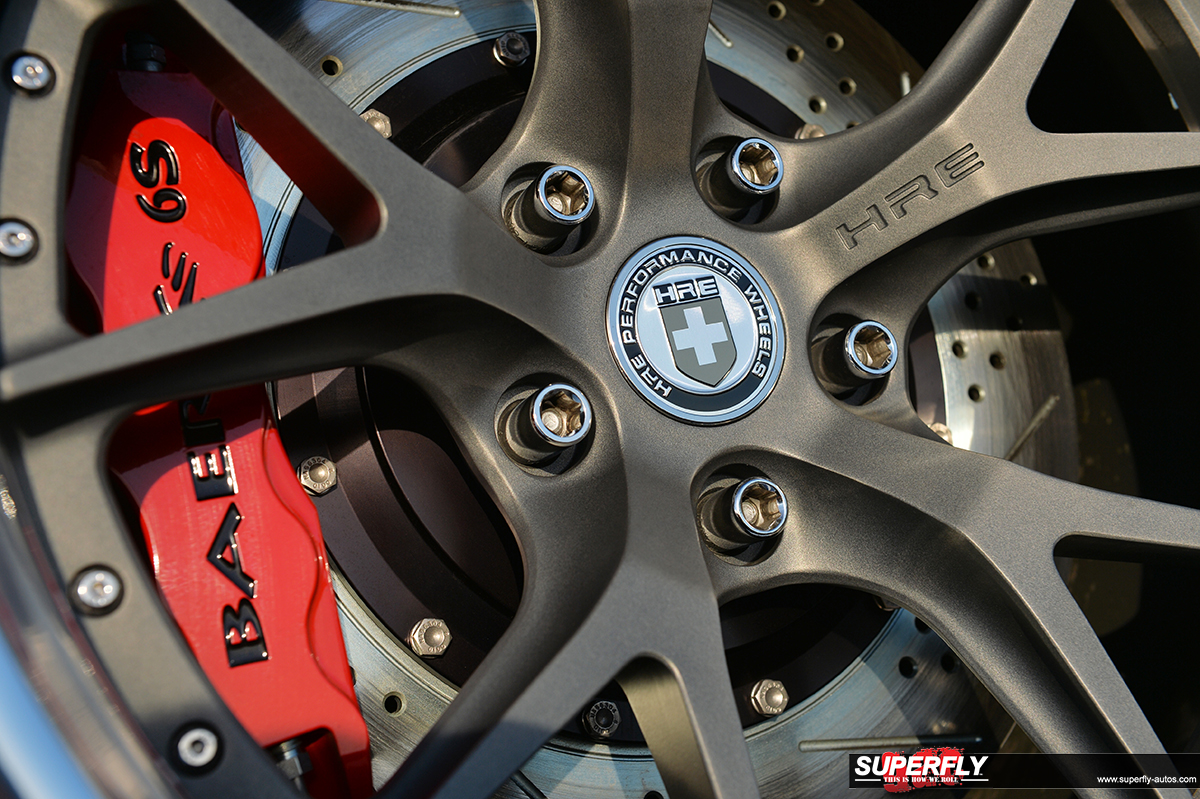 The Pantera’s signature roar is created by a pair of Flowmaster Pro Series laminar flow stainless steel mufflers and a pair of custom built headers.  To be sure that the car’s massive power gets put to the ground a set of HRE S101 three-piece forged wheels measuring 19×9 inches in the front and 19×12 inches in the back and were shod in 275 and 345 width Nitto Invo tires, while Baer six-piston calipers on all four corners were tasked to bring this modern classic to a stop. 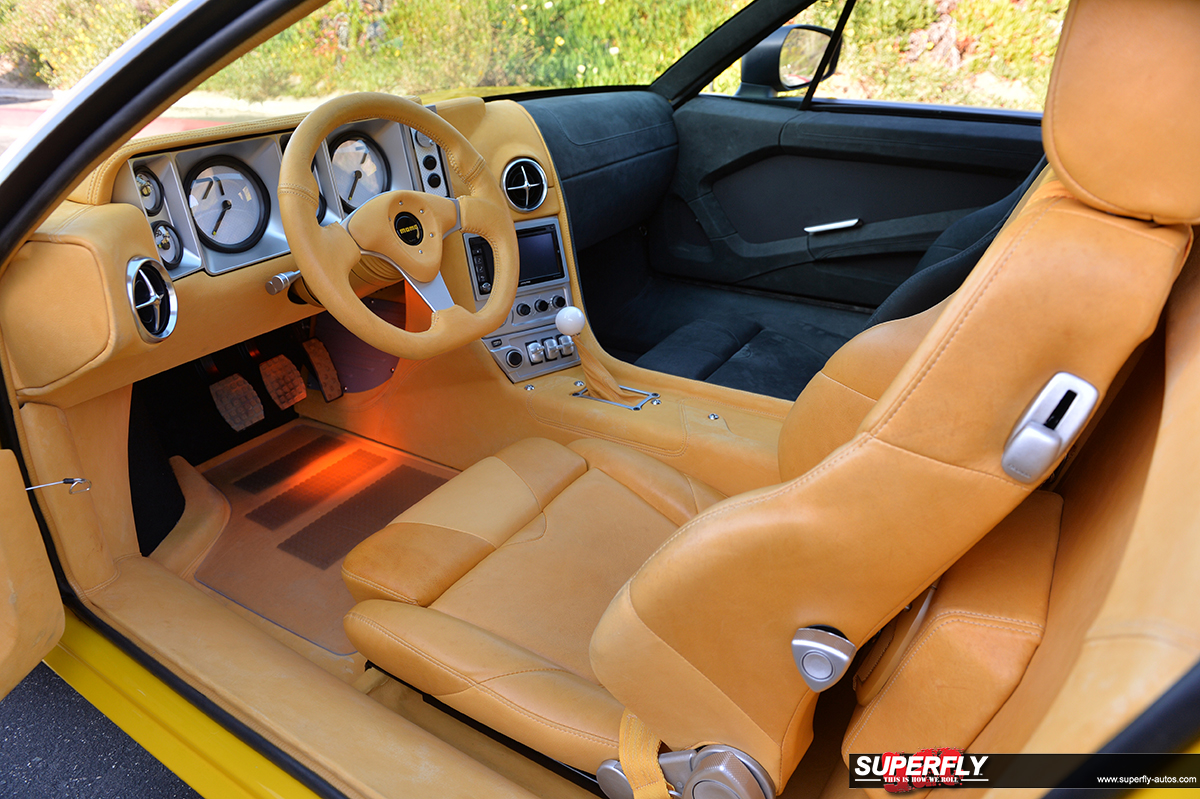 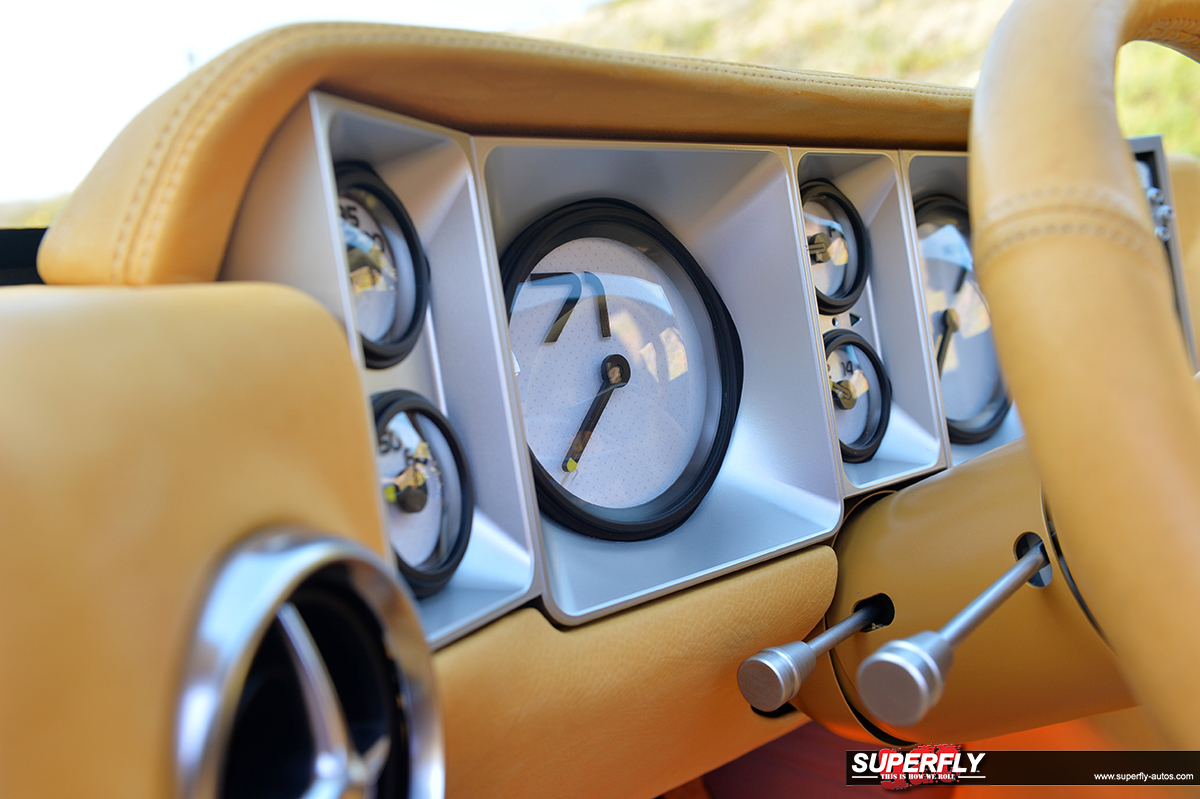 To keep the car planted and controlled in the corners, Ringbrothers turned to their friends at Roadster Shop to source new front and rear subframes built around C5 Corvette suspension components with custom tubular control arms and upgraded sway bars. Ringbrothers then custom fit the subframes onto ADRNLN’s monocoque chassis and added a set of AFCO Racing monotube shocks to ensure the car will be stable and predictable on the track or a winding back road. 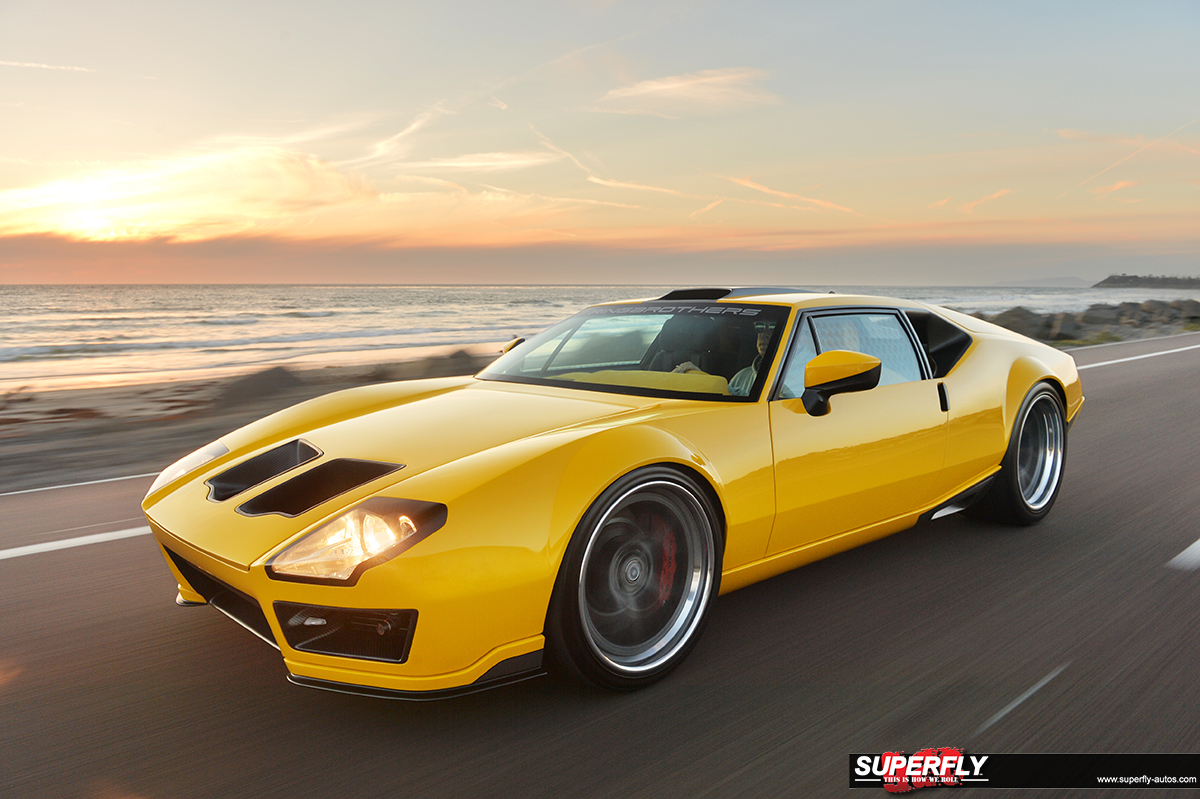 The interior was designed in collaboration with Nike’s Innovation Skunkworks Design Team. Thinking outside of the box, the team of Nike innovators worked with Ringbrothers to design an interior that presented individualized color and material experiences unique to driver and passenger. The driver is truly the commander of this car – with all focus of the interior built around the driver’s seat. The driver’s side highlights performance and luxury with a buttery leather-covered Recaro racing seat, as well as access to all controls, knobs and the Alpine touchscreen stereo. The passenger side is swathed in dark colors, emphasizing simplicity and lacks the most basic of functions, including an A/C vent. 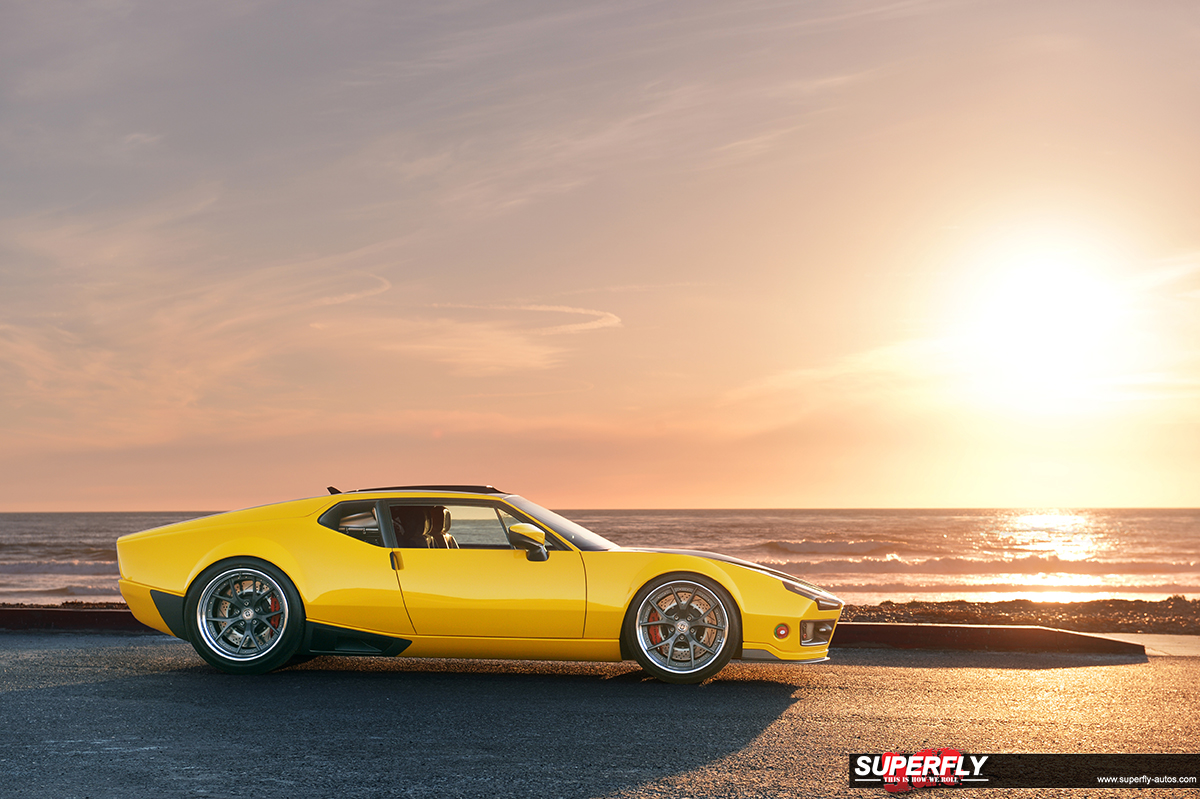 Cheryl Brickl took her husband on one last joy ride in the yellow Pantera, now known as ADRNLN, before she put the car up for auction January 2015 at the Barrett-Jackson collector car auction in Scottsdale, Arizona. The ADRNLN is now at home at the Gas Monkey Garage in Dallas, Texas with proud owner Richard Rawlings, star of Discovery channel’s “Fast ‘n’ Loud.”