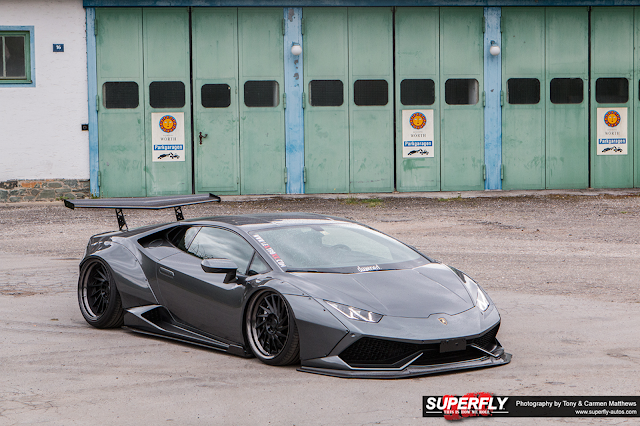 SHE’S A HOTTIE, HAS A WIDE BODY, SLAMMED TO THE FLOOR AND ITS OWNER IS JUST AS HOT

Words & Photos by Tony Matthews
In the last few years, we have come to expect some incredible creations from the house of Liberty Walk in Japan, as its founder Watura Kato has definitely brought back to the car scene, the wide bolt-on bodykits and has executed in style. Since these epic kits came to market, we have seen Lamborghini’s, Audi’s, muscle cars and even BMW Mini’s get the treatment and for each vehicle, the kit actually works! Some kits are just not made for every car style, but Liberty Walk have managed to pull it off and when you look at each car with their kit, it truly makes them more aggressive, especially when slammed on the ground.

So in the last 6months, we have seen Liberty Walk make its way over to Europe and have setup a Liberty Walk UK and are now setting up in Germany via our good friend Marcus who owns the shop www.dumpd.eu Marcus specialises in importing various parts such as Accuair airride suspension and of course, the Liberty Walk kits. And like all shops that sell the kit, they all have one signature car to showcase the kit at events and who better to than the car passionate and rather sexy Lexy Roxx, who just purchased a Lamborghini Huracan.

Now Lexy is a girl that has a huge passion for cars, having owned a very custom Volkswagen Golf Mk2, a Mercedes C63 and now this slammed beauty! Not only does she like cars, but she also loves to modify them and attend various cars shows. In was in the end of 2015 when she had finally managed to save to buy a supercar, which has been a dream of hers for along time. She was choosing in between a Mclaren P1 or a Lamborghini. And as you can see, the Lamborghini won that one and like usual, it didn’t take long for the Lambo to get the custom treatment.

It was at the Sema Show last year, where Lexy got up close to the Liberty Walk cars, that had been seen all over Japan and that was it. She was hooked and it also helped her to make the decision on which supercar to buy. So with the help of Marcus at Dumpd, a Liberty Walk was shipped over from Japan, a set of R3 Wheels delivered from the nice chaps at R3 Wheels in Germany and of course some much needed Accuair suspension.

The Lamborghini was going to be the first Huaracan in Europe to have a Libery Walk kit and so the car had to have all the goods bolted-on in time for the Worthersee event in Austria. Each year Lexy and the guys at dumpd, XS Mag and Fnglt do a Worthersee tour and bring some of the best cars in Germany to this epic location. Based in the Austrian mountains, car guys and girls drive from all over Europe and the UK, for a week of chillin by the lake and car watching. This year was special for Lexy as the man himself Mr Watura came all the way from Japan for a European tour himself to establish his brand in Europe and so his pitstop was Austria.

When we finally got the opportunity to photograph Lexy’s Lamborghini, she couldn’t  be available, but we managed to get some awesome shots and we are planning for another shoot with Lexy and also her other rides, so keep with us for more updates.