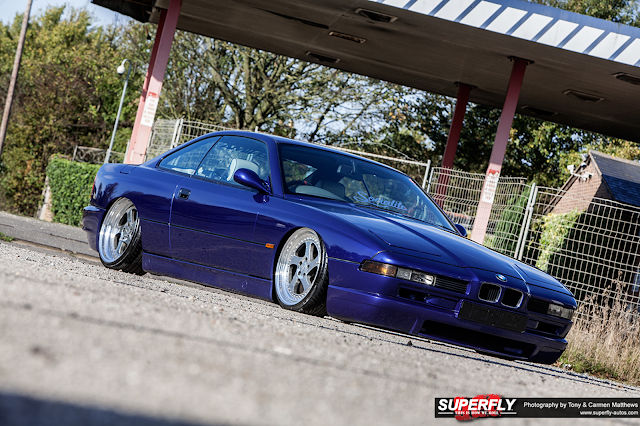 Since its introduction in 1989 through to its final production in 1999, the BMW 8 series has been at the forefront of the luxury car market, becoming the flagship series for BMW and even taking the place of the famous 6 series upon its release. They cost more than 6 series, but more than made up for the excess costs in the additional power and performance.

Although things were not all plain sailing in the beginning, which saw the 8 series stuttering with the initial model release the 850ci V12. The costlier model was not selling as well as forecasted and it took until the release of the 840ci V8 model to really cement the flagship status of the 8 series as BMWs top line of cars.

With only 10 years of production for the line however, they have since become quite the rarity on the road and have fast become hot property amongst collectors. One thing remains, though you will almost never see a modified 8 series car, especially an 840ci V8 model. Luckily Max Clifford has allowed an in depth view of his pride and joy, a modified 1999 E31 840CI SPORT.

Funnily enough, Max didn't even know about the 8 series models until very recently. Upon seeing one pass him by on the road, he knew he had to have one for himself one day. The allure came from the high quality craftsmanship starting from the factory.

This series was a high-end model, so the monstrous 4.4 litre V8 engine was the notable attraction, but even the finer details and aesthetics of the car appealed to Max, including the fancy pop up headlights, the flashy pillar-less design of the body and the classy memory seats it looked as good as it performed.
As such a big high-end car, the running costs for such a vehicle are pretty high. Matt realised he had to be sure to find the best conditioned model he could find, and that by forking out a little more on the model will ensure that the running costs and the modding expenses were kept down. So when he found a gorgeous blue metallic 1998 840ci Sport for sale, he wasted no time and purchased the stunning model.

The car was in as a condition as he could have hoped to find, with only a few tinkering required before he picked the car up from the seller. All that was left was to decide what needed upgraded and what he could do to take the car to the next level in performance and style.
The wheels were the first part to get an upgrade. While the model was by no means ancient, it still needed a nice touch of modern style, so Matt decided to for custom Rotifrom TMBs. These came with 9j fronts and 10j rears and required appropriate tires.Â  215/35s were opted for the front wheels, with the bigger rear wheels getting 235/35s. The problem was that the wheels only came in 5×112, which meant the need for G23 20mm adaptors.

Next was the air suspension. Matt wanted his car to be close to floor yet fully optimal and since the model was so expensive, it made sense to get a proper kit befitting of such a fine car. This called for a professional input, and PURE Customs of Coventry were the right guys to install the air suspension kit.
The struts of the kit needed to be integrated with the factory hubs to allow as low a setting as possible. For this, the guys had to cut and weld away to ensure as getting the car low enough to make the kit worthwhile, and worthwhile is certainly was.

Inside of the vehicle was high end too, with all the works included. Nothing showcased this more than the stunning ivory sports leather seats and interior of the car, which contrasted gorgeously with the blue exterior. Some nice touches were made by swapping out the 4 spoke steering wheel with a sportier 3-spoke one instead.

Other than that, the interior remained untouched, keeping a more vintage look to the model, which is a far cry from most modders, who cannot wait to strip the interior. But this is a luxury car, and Matt knew that he had more than enough from the model straight from the factory.
Now the car is the envy of enthusiasts up and down the country. Each show he visits sees hundreds at a time snapping up the impressive and one of a kind custom job he has completed.