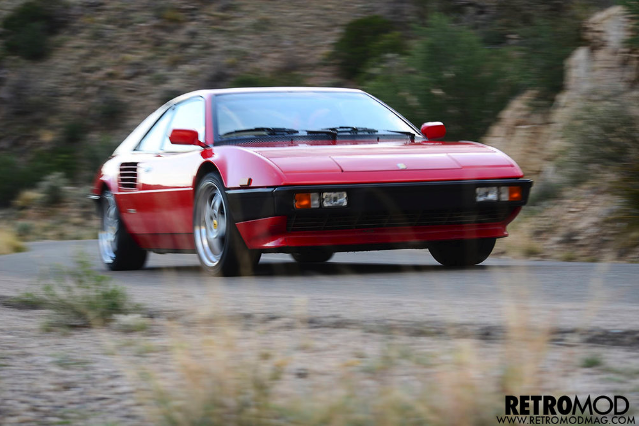 Story and photography by Zach Mayne for @retromodmag

There is no doubt that the Ferrari Mondial 8 gets a bad rap. “Worst Ferrari ever!” and “Ugliest Ferrari ever made!” and “Most boring Ferrari ever!” are phrases that seem to be hurled indiscriminately at this model with alarming regularity. But you know what? I would wager that most of the people who have such a low opinion of the Mondial probably haven’t had the opportunity to spend much time around one, let alone behind the wheel. The reality is that the Mondial handles great and has a terrific, sweet-revving Italian V8. It’s also remarkably practical (for a Ferrari) thanks to two trunks and a back seat, the latter admittedly only useful for very small children, a couple bags of groceries or a bag of golf clubs. And typical of Pininfarina designs, the Mondial's styling just keeps getting better with age. It may rely on subtle aesthetics but it’s got some great lines that are punctuated by a handful of rakish strakes and grills. Like most Italian cars, the Mondial's aesthetics are perfectly balanced front to rear. Of course like every other car on the planet, there are many ways one can go about improving a Mondial. Early cars in particular aren’t exactly powerhouses. When it was launched in 1980 as a replacement for the outgoing 308 GT4, the Mondial was powered by a CIS-injected 3.0-liter, 4-cam V8 that pumped out 217-hp and 179 lb-ft of torque, hardly mind bending numbers. Add in a curb weight of over 3100-lbs and its easy to understand why period magazine testers were a bit tepid on the Mondial. Ferrari improved the situation over the Mondial’s production run, first by utilizing the 3.2-liter, 4-valve per cylinder V8 from the 328. Things got even better in 1988, when the Mondial T (for transverse) was launched with the same 3.4-liter, 300-hp motor that powered the 348. The Mondial T was a genuinely quick car and very fun to drive in stock form.

But back to the Mondial 8. I recently had the chance to spend a couple of weeks behind the wheel of Carobu Engineering’s Mondial development car, which they've used to illustrate the dramatic improvements that can be made to a Mondial. As is obvious in the photos, the car has been modified for better performance, most obvious of which is the lower ride height and beautiful 17-inch, 3-piece alloy wheels. What is not as obvious is the fact that the car's original 3.0-liter was enlarged to 3.5-liters, a change that pushes its performance a little beyond that of a Mondial T and closer to a 348. The result is what Carobu refers to as a 358RR (3.5-liter V8 with Razzo Rosso components). "Building a Stage II version of our 3.5-liter, 2-valve, CIS injected Mondial engine was always an option," says Tate Casey, who owns Carobu along with engine builder Bert Wehr. "The extra power was needed to overcome the heavier Mondial chassis." A Stage I 358 is created by slipping a Razzo Rosso billet crankshaft with a 78-mm stroke into the V8 block. The stroker crank actuates 85-mm Razzo Rosso forged pistons that slide inside special cylinder sleeves of the same type used in the later Ferrari 360. Once they suitably enlarged the engine's displacement, Carobu analyzed other areas of the motor that could be tweaked for more performance.

"The Stage II modifications centered around improving the intake port ﬂow." adds Tate. "Special 44-mm oversize intake valves were used in conjunction with improved porting to raise the airflow by 10-percent." Another area that was focused on were the camshaft profiles. "CIS injected engines are very sensitive to valve overlap so the duration of the camshafts had to be conservative while still making good power." In this case, the manifolds were left stock but a more free-flowing muffler was installed. Customer engines can of course be fitted with aftermarket headers from Tubi or other brands. Likewise the ignition is still the original Magneti Marelli setup. Though the car's mechanicals have been modified, the interior of the Mondial was left stock. Personally, I would have fitted a set of period correct Recaros or something similar. The Mondial 8's original seats are neither all that comfortable nor very well bolstered so they don't offer much support during spirited driving. Twist the key in the ignition, the starter spins for a couple of seconds and the V8 fires to life and then settles down to a high-strung idle, in this case its backed up by a deeper sound spilling from the quad exhaust thanks to the added displacement. Unlike later manual Ferrari shift levers (think F355, etc), which slide through the gears in a light but precise manner, the Mondial's shift lever takes a little muscle to engage, forcing you to really take control. Once underway it's immediately apparent that all is not stock under that mid-mounted engine lid. By 3,500-rpm the engine is pumping out over 250 lb/ft of torque, with max torque of 265 arriving at a usable 5,000-rpm. What that means is that the car is far more usable in city driving, with immediate and strong acceleration on tap the moment I squeeze the throttle. When the engine shrieks past 6,400-rpm, it's producing 306-horsepower. Thanks to the higher compression ratio of the pistons and more aggressive cams the V8's throttle response is dramatically improved over stock. The engine goes from simply "so-so" to downright exciting and engaging, revving quickly and responsively throughout the rev-range with enough power to push me back in the seat.

The additional horsepower is matched nicely by the upgraded suspension and wheels. Here, Carobu had the stock Koni shocks rebuilt and converted into height-adjustable coilovers. Wheels are 18x8 and 18x9-inch lightweight 3-piece alloys. The rear brakes were left stock but the fronts were replaced with a big brake kit from Brembo that includes larger rotors clamped by larger, 4-piston calipers. Compared to a 308 or a 328, both stock and modified examples of which I’ve logged miles in, the Mondial’s longer wheelbase provides what I would see as two advantages over it’s more extreme stablemates. The first is that the ride is more supple and the chassis soaks up bumps and road irregularities in a superior manner to the shorter wheelbase 308 and 328 cars, particularly when it comes to a modified examples that have even stiffer suspensions.

And the second advantage is that the handling is more predictable in the Mondial, making it a more confidence inspiring car when it's really pushed hard. Encouraging the Mondial to oversteer is easier than it is in a 308, which feels like it’s on more of a knife-edge when nearing the limits of grip. On the other hand, this example feels even more approachable, slipping into oversteer in a more progressive and easy to control manner thanks to the lower, stiffer suspension. And the added power means that power oversteer is always available on the exit of turns, whether a little or a lot depending on the courage of the driver. While handling is overall pretty neutral, it will understeer if you enter a turn too fast and pile on too much steering lock. The stiffer suspension and wheels on this one makes the front end feel pointier, but it still doesn't have the best turn-in response. Likewise, the steering is on the heavy side- particularly at slow speeds and tight corners- lacking the light, nimble feel of something like a Porsche 911.

The Brembo brakes are a terrific upgrade over the stock brakes, yielding far better stopping power, especially when paired with the larger contact patch provided by the wider wheels and tires. Overall, the changes made to this Mondial yield a dramatic improvement in performance and sheer driving fun. This car is rolling proof of the goodness inherent in the oft-maligned Mondial, which at heart is a true driver's car.
Labels: 358 razzo rosso 358RR Brembo Ferrari Koni magneti marelli mondial Pininfarina v8 Zach Mayne