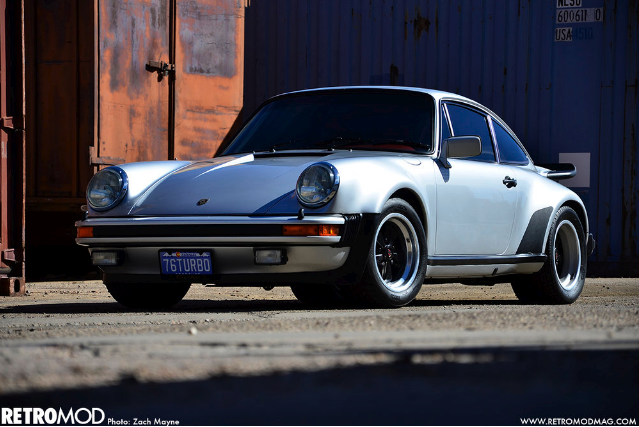 Story and Photos by Zach Mayne for @RetroModMag


In December 1978 a young car enthusiast by the name of Kurt Lochmiller came across a 1976 930 Turbo for sale at a Denver, CO car dealer. “Just by luck or fate I walked into a local wholesaler and retail car dealer and saw the car,” he recalls. “It had about 32,000 miles on it. They had jut received the car in from New Jersey.” With it’s outlandish fender flares and generously sized rear spoiler Lochmiller was completely blown away by the Porsche’s appearance. He had previously owned a ’72 911S Targa, but this new supercar from Porsche was on a whole different level. “With the whaletail, there’s not another car like it,” he says. A drive behind the wheel of the fearsome machine sealed the deal. “This was the car that could do it all. You can road race it, drag race it or drive with your family in it. This was a brute of a car, the way it looked and drove. I was not giving it back to the dealer. It was mine.” Lochmiller happily traded his Ferrari Dino 246 GTS straight across for the German machine. “I still remember the first time I drove the 930, it had two speeds: fast and faster,” he says. “I’ve been driving Turbos for close to forty years and the first Turbo you ever drive you never forget. When he first acquired it, he assumed the 930 was just a standard production example, still incredibly special, but certainly not that unique. As he would later discover though, the 930 he had bought was actually the very first one that Porsche had built for the United States market. Not only that, but it is almost certainly the same car that was featured in Road & Track magazine and several other publications as a press demonstrator. A year after he acquired it, Lochmiller read the January, 1976 issue of Road & Track, in which the magazine's editors had published a review of the then new 930 Turbo. Lochmiller couldn't help but notice that the test vehicle was identical to his own, right down to the all red interior. He knew the last four numbers of the 930's VIN (930068011) marked it out as an early production example, and was curious enough to get in touch with the magazine's office. "I contacted Road & Track in California," recalls Lochmiller. "I can’t remember the writer’s name but he told me that my car was used in the article and stayed on the East coast.”

He also thinks that the car is likely the same one that was on the cover of the January 1977 issue of Road & Track for another comparison, this time with a 934 and a 935. This hunch might even be confirmed by the story, which states that the silver car on the cover was indeed an East coast car, which cost $25,880 as opposed to the $26,000 that a 930 cost on the West coast. The likely use of 011 in the article was confirmed by the writer he spoke with at the magazine, who told him the car was also featured in the January 1977 issue. One of the reasons that Lochmiller is fairly convinced that he's in possession of the the original press vehicle is in part because of the lack of sunroof. The 930 was a high-end car when new and as such most were loaded with options, which usually included a sunroof. While the probable use of the 930 as a test car was interesting, Lochmiller soon moved on and in the meantime continued using it exactly how Porsche intended, which was driving it often and driving it fast. “In the 1980s and 1990s I drove the car on a regular basis,” he says. “I live in Denver and mountain driving with a 930 is the best, even during ski season in the snow. On trips through the Southwest you can really let the car loose.” About 30,000 more miles were added to the odometer.


In 1991 Lochmiller was told by a friend that if he faxed the Turbo's VIN to the Porsche factory in Germany there was a good chance that they might have some information on it's history. At the time, no one really cared that much about serial numbers on most production Porsches, even 930s. Lochmiller was given the fax number for Olaf Lang at Porsche. He sent over the VIN for the Turbo and also inquired as to whether it had been used as a press vehicle. A few weeks later he had forgotten entirely about sending the fax. Then one day a few months later an envelope from Porsche appeared in his mailbox. Inside was a letter that in part stated: Our records show that the above vehicle was indeed the very first 911 Turbo built for the U.S. Market. Your car was one of two 911 Turbos built in April/May 1975 that were used for homologation purposes in the U.S. by our importer at that time, Messrs Volkswagen of America. According to the letter, 011 had been painted Metallic Silver and fitted with engine number 6860021. The interior color was made to sample and was not recorded. Since the car had been built for North American homologation purposes, no options were installed on the car, which explained the lack of a sunroof.

“This letter stated that my car was the first car that started the Turbo craze in the good old USA,” says Lochmiller, who was understandably ecstatic at the news. Unfortunately, one thing the letter did not confirm was whether the 930 had been put to use as a magazine test car. It went on to explain that no such records existed at the factory, only confirming that the 930 was one of two that were made for the express purpose of North American homologation and testing uses.

Over his many years of ownership, Lochmiller has kept the 930 completely stock and original with the exception of the wider rear Fuchs, a change that happened not long after he had purchased it. “The early Turbos came with 15-inch Pirelli CNX tires that were not very wide,” he says. “A friend at the time said I should try the 15x10-inch RSR wheels, so I went to Porsche and ordered a rear set. 930s were made to have these wheels. With those wheels, you look at it and get what it is all about.” When he installed the new 10-inch rear wheels, he also moved the original 8-inch rear wheels to the front in place of the 15x7s. The wheels are currently shod with Yokohama AVS tires.


In person, this old 930 looks as outrageous as it must have when it was first unveiled to the public at the Paris auto show in 1974. And while it's not quite as special as the original show car, there is something very cool about being in the presence of the first 930 to land in the U.S. Wide, shiny-rimmed 15-inch Fuchs alloys strain out to the edge of the wildly widened fenders and that flat Carrera spoiler- big enough to use for a small picnic- looms imposingly over the rear end, which has the highly evocative Turbo Carrerabadge fastened to it. Lochmiller was generous enough to toss me the keys for a brief drive, an offer I could not pass up. Could you? Once seated inside, there is no escaping the bright red hue of the interior, which is a sea of scarlet that encompasses the dash, door panels and even the carpeting. There is a smattering of black trim limited to the arms rests and lower dash pieces. The centers of the seats are upholstered in oh-so-Seventies red and blue plaid, and they’re surprisingly soft and comfortable. Just past the thin-rimmed 3-spoke steering wheel are the traditional 911 gauges, the big tachometer front and center. Typical for many turbocharged engines, at idle the 930 is on the quieter side, the 3.0-liter flat-6 exhibiting an understated whir that’s more engine harmony then outright sound from the muffler. The clutch is stout but has an easy to read engagement point, the 4-speed gearbox sliding precisely into gear. At normal RPMs, the 3.0-liter is torquey enough for decent off-boost progress, but with a turbo-friendly, low compression ratio it's not as responsive as an earlier mechanically fuel injected 911. Once the turbo starts spinning up though, the Turbo's character takes on a whole new dimension. With a factory claimed 234-hp at 5500-rpm and 245 lb/ft of torque at 4,000-rpm, there is more than enough power to motivate a car that weighed in at just over 2,600-lbs.


When that big tach needle wraps its way around the dial to around 3,000 RPM though the 930 surges forward on a wave of boost, pressing me back in the seat. The engine note transforms from an almost musical whir to a harder-edged growl as rpms increase, with a subtle whirring and whistling emanating from the rear of the car as the Porsche launches down the road. Sure, time has dulled the 930s acceleration. A stock 930 such as this one is merely quick but far from gut-wrenchingly fast. That’s not to say it isn’t extremely entertaining, which it is. At higher freeway speeds there is something magical about the forward thrust when the turbocharger comes on boost. In fact it’s at these higher speeds that the car positively comes to life, hunkering down and rocketing forward as strongly as it does in the lower gears. All these years later, the 930 still impresses. One can only imagine the slack jawed amazement this car must have instilled when drivers first got to experience it in the late '70s.
Labels: 76 Turbo 911 911T 930 Porsche RetroMod Mag Turbo Carrera Zach Mayne