Check Out This JDM Barn Find Of A Lifetime! 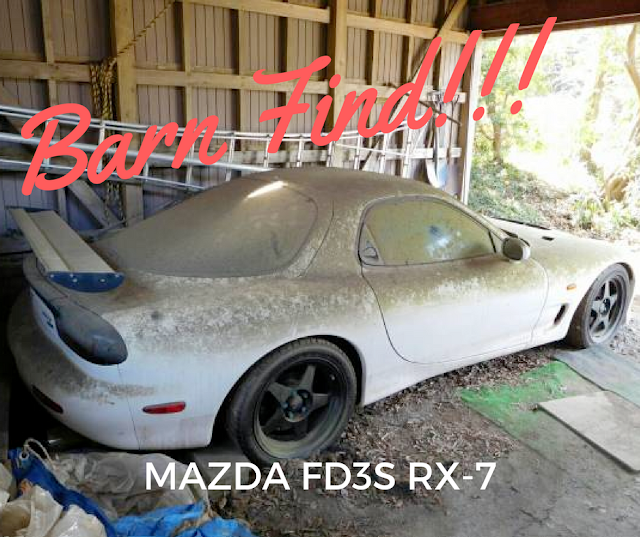 THERE'S AN RX7 FD SOMEWHERE UNDER THAT THICK LAYER OF DUST...

Our boys at JDM Buyer came upon this sad scene when browsing the auctions today - an abandoned RX7 FD.

The owner says he parked it in the barn back in 2010 after having clutch troubles and getting tired of fixing it. As you can see, it's been sitting ever since. The body is covered in a thick layer of dust - the only clean spot looks like an area that someone cleared off the window to peek inside. I'm not sure if all that dust will buff out, but we're going to try!

From the outside, it doesn't look all that valuable. Other than the Desmond Regamaster wheels, it has a dated wing that should go in the trash, and some body panels that might never be clean again. Then you pop the hood...

The engine bay is loaded. Now, pretty sure the rotary is in a pretty sad state after sitting for nearly seven years, but look at this list of mods:

Inside doesn't look half bad, either.

A nice pair of Recaro seats that look pretty mint. The steering wheel doesn't look very worn either, so our guess based on this pictures is that the interior is in great shape. After all, no one has sat in it for nearly a decade... So what is JDM Buyer going to do?

Right now it's listed on Yahoo Auctions. The auction is ending soon - they're watching it and are going to place a bid when the date gets closer.

If they win, they're going to be forced to part it out - it's too new to import to the USA (stupid import laws!), and after being stored for 7+ years, the amount of work it'll take to get it running again isn't on their list of to-dos. They would have to re-do quite literally everything: fuel lines, the gas tank is probably rusted, the body would more than likely need a repaint with all that fused dust, and the engine will need who-knows-how-much work.

But hey, someone out there looking for a 13B that needs some work will be happy, and they'll have a full body and interior's worth of an RX7 FD on their online store. It's a sad end to such a nice car, but they feel like it's the best course for something that will need this much to revive it.

Stay tuned for Part 2, where they will (hopefully!) have a post about a winning bid and it being on the way to their yard in Osaka. When it gets there they'll post it and send an alert to their mailing list and list some of the parts on throtl - subscribe to their email by visiting their page and keep an eye on throtl so you don't miss it!
Labels: 13b Apexi ARC barn find FD3s Fujita Engineering Exhaust Greddy HKS JDM JDM Buyer Mazda Recaro Revolution Coilovers Rotary RX7 Yahoo Auctions