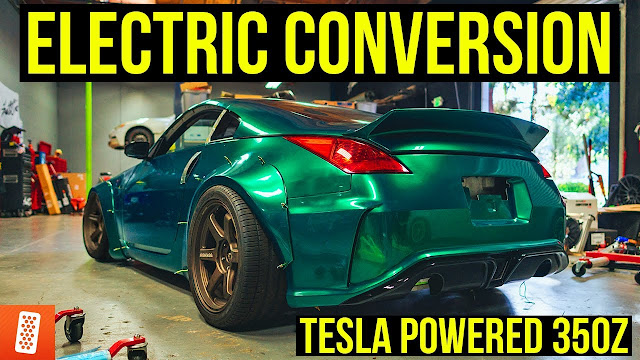 Today we talk about our 350Z electric project, which started when we got a bare-bones Nissan 350Z rolling shell and decided to put a Tesla motor in it and build an electric car. The work started as we mounted an entire Tesla rear subframe into our 350Z chassis. Inside the Tesla subframe was the Tesla motor and inverter, as well as the axles and all the other suspension bits that typically tie in on a subframe.
Since the Tesla subframe was so broad, we decided to add Liberty Walk widebody kit. By fixing that, we were able to encase the wheels under the fenders and also update the front end to a 370Z face.
Subsequently, we took the car over to Stealth EV, where we started the battery and wiring work. Sponsored by Peak Performance, in this episode, you will find the car in our shop, where we get it ready for final assembly and wiring.
Meet Will
For this particular project, we took the help of Will from Stealth EV, who is the sole person behind getting this car done in a timely fashion. Mickey and Ricky worked to give him a hand, but the job is now on Will's shoulders.
Installing Quaife limited-slip differential in our Tesla motor
Before we brought Will to our place to finish the 350Z electric project, Mickey was at Stealth EV’s workshop for installing the Quaife limited-slip differential in our Tesla motor. We also installed some new bearings from SKF to get both wheels spinning right for some skids. You can watch the entire process in the video below.
Will is now at throtl, coming every day until we complete the project. His work started with connecting everything between the high voltage and the 12-volt and making it all work. We had some loom, some heat shrink, cables to run, and charge boards to put in.
What we did at Throtl before Will joined us?
We had previously mounted a Honda Civic radiator at the back to cool the drivetrain, removed the rear seat panel area, and added a bunch of materials so that we can put a battery box that's going to contain four Tesla batteries, our battery management system, a bunch of connectors, and our wiring and cooling.
We also got all of our high voltage cabling routed from the motor to the box and then the box to the front battery box. It now sits on the existing subframe, and it mounts on the front and back frame rails. It would support the additional 12 batteries, cooling, and thermistor wire. We also fixed a full-size 350z radiator to cool down our batteries.
Installing thermistor expansion module
Will's job started with mounting the thermistor expansion module. This device connects to each of the battery modules in the front box and reads the temperature of the coolant going in and coming out. He also needed to install Orion wi-fi connect, allowing us to communicate with our VMS on our cell phone.
Will had to install the thermistor expansion module underneath the dash, behind the glove compartment. We needed to connect a couple of wiring harnesses from this module itself down to the front box inside the engine bay. Our small connector on the right of the module is for power and coms, and the two larger connectors are for the thermistors themselves. The two wiring harnesses were needed to go through the firewall. Check out the entire process in the video below!
Socal Euro
We are going to Socal Euro this Sunday, October 3rd. We are bringing the ice cream truck and a ton of cars. It is going to be a fantastic event. So, if you are in the Southern California area and want to make a road trip, head on to Socal Euro. Check out the event information here: https://www.big-euro.com/
Labels: 350z custom electric electric conversions engine Liberty Walk modified motor Nissan swap tesla tesla powered throtl vehicle wide body widebody wiring