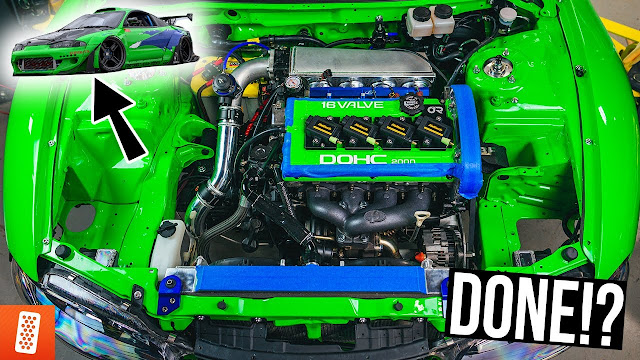 We hope you guys are enjoying our Modern Day built of 1998 Mitsubishi Eclipse GSX. We are getting closer to finishing this project! Today’s episode starts with installing the 10 Micron DW fuel filter underneath the battery tray.

Meet Brendon from Dyme PSI, who helped us with the plumbing on the FREK, and now he is assisting us in plumbing the Eclipse.

Brandon makes plumbing any car super easy through his innovative plumbing kit, for which he received the SEMA Innovator of The Year Award for.

The kit essentially develops hoses for any car without actually making a hose. The kit contains analogs of every fitting part that Brandon's company makes so that you know what fits where. You can try a bunch of different shapes and angles to route the perfect line for your setup.

The segments link together to form an analog of how the hose performs, so you can fit it on the car and see what’s in the way and if there is anything that’s going to clash, or rub. Once you have the specs, you can upload them to Dyme PSI and they will build the lines and ship them to your door.

In this episode, Brandon helped us with the cooling system, the oiling system, as well as our fueling system. We had some of the fueling system stuff already tackled. Brandon put 180 Degree fittings on the cooler to give us the clearance we needed on the bumper. He also added a bunch of lengths to the hose so that we could tuck everything out of the way.

We are lucky to have Brandon local to us. He can quickly shoot down our workshop, help us out, go back to his shop, produce the lines we need, and get back to us pretty quickly. Brandon made us oil cooler lines in just one business day! Which we were able to toss in the vehicle in no time.

Mickey finished the hot side charge pipe with tape, and Quinn disassembled it to get it over to the fab area for welding. Quinn also dismantled some of the cooling lines. We wanted to change the cooling setup for the turbo because we did not have liquid coolant going through the oil filter housing. We already have our air to oil cooler installed, so we didn’t need some of the coolant piping that’s in there.

First, Evan had to weld our FP Turbo on the Mishimoto clamp system. As Mickey had already prepped up the hot side of the intercooler piping, Evan just had to tack everything together before welding.

After that, we tossed the STM intercooler back on the front and welded the intercooler piping before installing it.

The last part of the build was to fix the side skirts, fenders, and front and back lips, which Rickie, Quinn, and Mickey did perfectly. It is entertaining stuff; check it out for yourself in the video below!