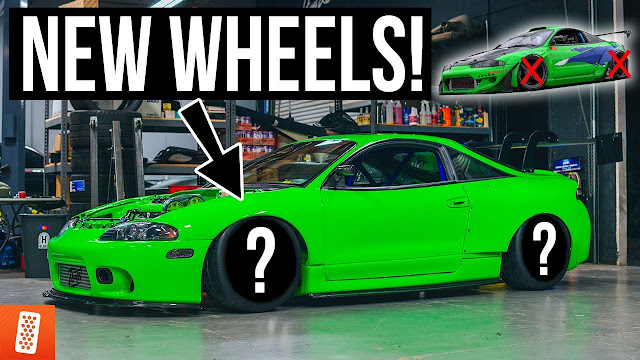 We've got tons of new parts for the Eclipse! As the SEMA show gets closer, we make more progress on completing the Eclipse. In today’s episode of throtl, we install a full exhaust system from STM Tune, carbon fiber mirrors from APR Performance, an OHM Racing wiring harness, Haltech Ignition coils, and some new wheels from HRE.

Installing the exhaust system from STM Tune was quick and easy, however, there were some simple modifications that we had to do. Since we needed to mount a wideband  O2 sensor, we had to drill a hole into the front section of the exhaust. After getting the hole cut out, we were able to weld the bung for the O2 sensor.

After installing the STM exhaust, Mickey and Quinn mount some APR carbon fiber mirrors on the Eclipse. Since APR doesn’t make a direct bolt-on kit for the Eclipse, Mickey had to make a custom mounting plate out of a sheet of carbon fiber. He used the shape of the OEM mirrors to make a perfect cut on the carbon fiber, allowing the APR mirrors to mount up perfectly to the Eclipse. The mirrors look rad, as they look similar to the ones on the original Fast and Furious Eclipse.

After working in the engine bay, we show you the new HRE wheels for the Eclipse. Evan nailed the wheel specs and they turned out great for modern wheels with a taste of the original wheels from the Fast and Furious Eclipse. We immediately threw on some Falken RT 660 tires and installed them on the car. They look insane! Check it out for yourself in the video below.

Stay tuned for the next Eclipse videos as we will be starting it for the first time very shortly.