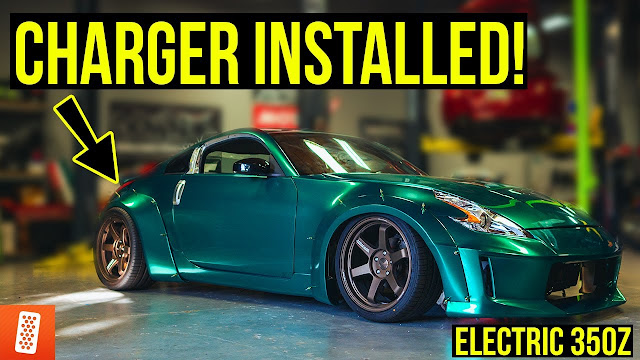 Some of you may remember from the last Tesla Z video, Will had removed the front battery box to make some final modifications before its final installation. In today’s episode of throtl, Will continues his progress on the Tesla Z’s battery boxes.

Will begins today’s episode by loading the batteries into the front box and prepares them for installation. After getting the front box prepared, Will removes the rear box. The rear box was removed so that we could install a battery charger, throw on a coat of paint, and get it ready for its final installation.

Before we can put the rear box back in, we have to install a battery charger and battery charge port. Will had to make a custom mount in order to get the charger to fit on the Z. We used a J1772 charge port and mounted it in the same location as the factory fuel cap on the 350z. It ended up fitting perfectly!

Check out the video below to see the steps Will took to install the battery charger and charge port on the Tesla Z.

Stay tuned for the next Tesla Z video as we will be reinstalling the battery boxes into the vehicle.