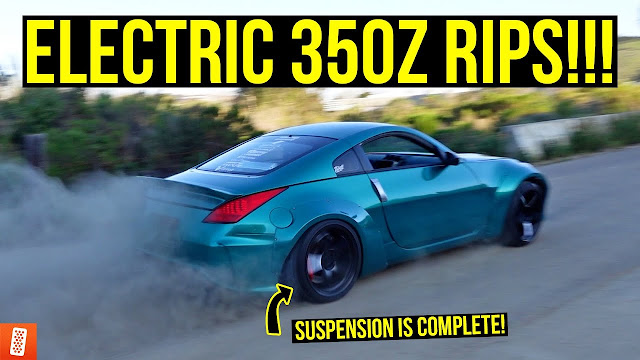 The Tesla Z is finally on the road, but that doesn't mean the build is complete. In today's episode of throtl, we continue to install more parts on the Tesla swapped 350z and take it back out to the streets for some more fun.

In the last episode of throtl, we made a very expensive mistake by taking the Z for a test drive without a proper hood latch. When Will and Rickie picked up enough speed, the Liberty Walk hood flew up and smacked the windshield. Luckily the windshield didn't break, however, the hood and both front fenders needed to be replaced.

Will kicks off today's episode of throtl by installing some custom hood latches on the Z. The Aero Catch hood pins and latches are awesome. They look great and provide quick access to propping the hood up and down.

After installing the new hood latches, Rickie and Will begin installing the Accuair air suspension. Since we wanted to give the Tesla Z a Tesla-style Dashboard, the boys made a custom Ipad mount on the center part of the dash. The Ipad is used to control everything from the power, speakers, and even the air suspension.

After getting the air suspension installed, Rickie and Will take the Tesla Z back out on the street and do some launches and burnouts. They were able to test the power and performance of the car with traction control on and off. It's safe to say that the Tesla Z rips! Check it out for yourself in the video below.